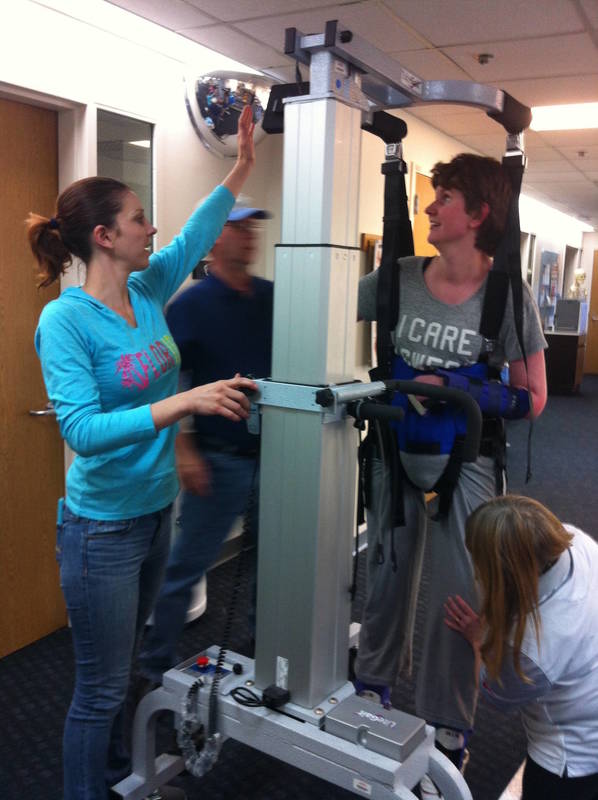 “We’re hopeful that Allison will be able to walk again someday. “

Allison Angove, a straight-A honor student and dedicated eventer with a bright future, was 16 years old on the day her life changed forever. Her accident didn’t happen over some formidable obstacle on the cross-country course; rather, she fell with her horse when it stumbled after a jump in the warmup ring, and she suffered a traumatic brain injury.

Allison spent the next 14 months in a coma and endured 15 surgeries, including one to remove the entire right side of her skull. Doctors gave her a 10% chance for recovery.

As Allison’s parents, Terri and Grant, processed unfathomable prognoses ranging from vegetative state to quadriplegic, they realized that both Allison’s life and their own had changed irrevocably. As weeks in the hospital turned into months, Grant resigned from his job to devote round-the-clock attention to Allison’s care—something they firmly believe helped her survive—while Terri earned the family’s sole income.

After over two years in the hospital and rehab, Allison was discharged. While she had regained some use of her right hand, she still had a feeding tube and tracheotomy and was completely reliant on others for even the most basic care. Anticipating the costs of in-home nurses, various therapies and the durable medical equipment they would need to make their house accessible, Terri submitted Allison’s grant application paperwork to the Equestrian Aid Foundation.

Allison has had to relearn everything: to swallow and eat, to smile and to speak. Eight years later, she continues to push forward and follows a rigorous schedule of speech, occupational and physical therapy. “The Foundation has really helped with Allison’s therapy, and she’s making progress,” said Terri.

Yet progress comes slowly, and minute movements become major victories for this weary yet resourceful family. This year, with their insurance company’s lifetime benefit allowance exhausted, Terri and Grant devised their own version of a treadmill with a walking harness and lift system so Allison could continue her therapy at home.

The drive and determination that characterized Allison before her accident are still hallmarks of her personality. As Allison’s parents have remained faithfully by their daughter’s side as she strives to regain the use of her body, Equestrian Aid is thankful for our donors who, through their generosity, have been at the Angove family’s side as well.