Meet Steven: From Sitting Tall to Coming Up Short 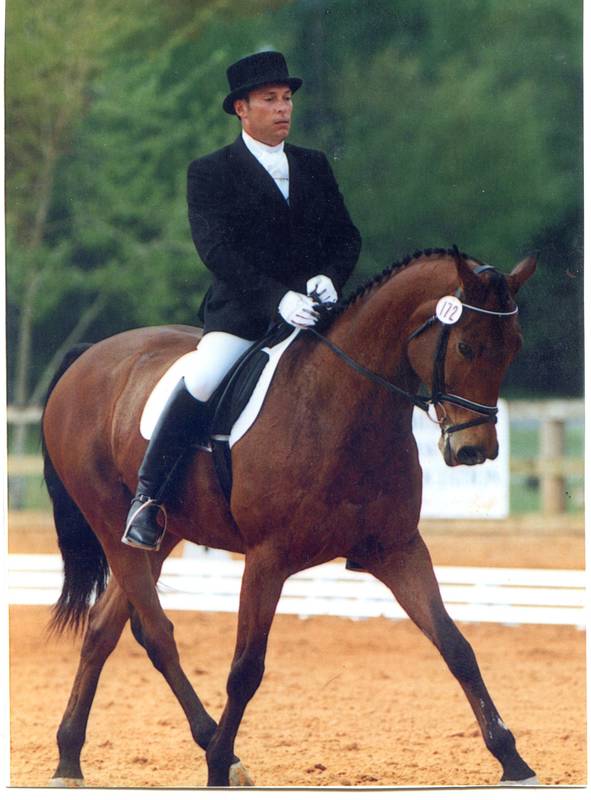 “The Equestrian Aid Foundation has been a lifeline—the difference between making it or not.”

Steven Castillo can’t remember a life without horses. While he dabbled in the jumpers and eventing as a youngster, Steven developed a passion for dressage in his late teens. Several decades later, this path led Steven to a successful career as a trainer, competitor, instructor and judge.

Steven prides himself on carving out a career on what he describes as “a real mixed bag of horses.” He remembers a range-bred thoroughbred he bought for $200 (pictured left). “He bucked me off daily for 2 weeks,” Steven said, “but in the end he consistently beat million dollar horses.” It was underdog horses like these that Steven competed through the Prix St. Georges level on the prestigious Florida circuit, and with these partners he won his USDF bronze and silver medals.

Yet it was illness that introduced Steven to the Equestrian Aid Foundation. "I have so many afflictions," he said, referencing HIV-related illnesses complicated by a litany of chronic injuries that come with the territory of making a living on horseback. In the early years, none of this stopped Steven; his horses and students gave him a sense of purpose and the motivation to carry on. It wasn't easy, and he nearly died on three occasions. Horses and his now-husband Dex brought Steven back to health again and again. "I've got horses depending on me,” he told himself, “and I've got to get back on with it."

Eventually, Steven’s health problems were career ending, and in addition to coping with his illnesses, he faced the accompanying sense of hopelessness. "People used to send me their difficult horses to train,” he said. “Now I am only able to give one lesson a week. I get so depressed because I always expected to be able to work for my entire life."

The Equestrian Aid Foundation made a positive change in Steven’s life by alleviating his concerns about medical and basic living expenses. "Without assistance from the Equestrian Aid Foundation, I would run short every month,” he said. “It relieves a lot of stress—it helps me heal and helps me from becoming depressed. All your support, kindness and generosity have been my biggest blessing."